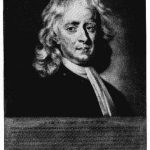 Sir Isaac Newton has long been regarded as one of the most brilliant scientist who ever lived, as well as one of greatest mathematicians in England’s history. However, Newton’s character and life was one made of long flashes of brilliance and followed by unexplainable eccentric behavior.

Isaac was born on Christmas day in a village in Lincolnshire, England. His mother described Isaac as being so tiny he could fit into a quart jar, while his father hoped that his new son would grow to manage the farm someday. Growing up Isaac barely maintained average grades and often lacked attention in school. Villagers looked upon his daydreaming, habits of reading for hours at a time, and keeping records of his interests as mere eccentricity. However, the first hints of Newton’s brilliance could be found in his boyhood inventions. He was responsible for creating sundials, an accurate wooden clock, water wheels, and even a kite with an enclosed lantern, which fooled the locals into seeing ghosts! One of his most practical adolescent inventions was a mill, which mechanically ground wheat into flour via mouse power.

Newton’s father died when he turned fifteen. Luckily, Newton’s uncle saw the potential of his nephew’s scientific talents, and enrolled him in Cambridge University. It was here that Newton was first exposed to the world of mathematics. Having come across Euclid’s Elements in a bookstore, Newton was able to quickly follow the work, although he had little mathematical background to begin with.

Having found the work easy reading, Newton became fascinated by mathematics and he quickly mastered Descartes’ difficult work, Geometry. From this point on, having been exposed to just the surface of the worlds of science and math, Newton’s appetite for both exploded exponentially. Newton quickly earned the respect of his peers and professors at Cambridge. For instance, at the end of his second year, Newton had taken the place of his professor, Dr. Isaac Barrow, who resigned in recognition of Newton’s superior mathematical skills.

In 1664, the Great Plague struck England and the university closed for a period to allow students and professors return home to prevent an outbreak at school. From 1664 to 1666, Isaac made his greatest contributions to mathematics. Relying on the works of Galileo, Kepler, and Descartes, Newton invented calculus, discovered the law of universal gravitation, and he did extensive work on spectrums. The creation and development of his calculus was said to be the first achievement of mathematics, however, Newton would not publish his calculus until much later in his life. This was a mistake which would repeat itself continuously throughout Newton’s works and writings.

For the next twenty years he continued to lecture on mathematics. So advanced was his mathematics that other mathematicians spent nearly fifty years trying to understand it all. Finally, in 1684, Newton began writing Principia or Mathematical Principles of Natural Philosophy, to help summarize his discoveries about the physical world. In this work, Newton placed an emphasis on motion. In it, he formulated the three laws of motion, the third of which is essential to the understanding of modern rocket power and jet propulsion. Furthermore, he discussed the motion of bodies in free space, the motion of bodies in a resisting medium, and the solar system and celestial movements. This work consumed Newton until its completion. He wrote often for 18 to 19 hours daily, while ignoring meals and having little sleep.

In addition to Principia, Newton wrote The Universal Arithmetic, which help to substantiate and advance his theory of equations. He also wrote papers concerning calculus, curves, optics, and analytical geometry. Again many of these works went unpublished until long after they were written. Newton, who was often reluctant to publish his writing, was finally coaxed into printing up his work with the urging of his mathematician friends. This proved too little too late for his most beloved creation, calculus. Although he had discovered calculus in 1666, he did not publish its description until the year 1693. During that time, a German mathematician named Leibiniz had created an identical mathematical work to calculus and published these results in Germany in 1684. As a result, Leibiniz was referred to as calculus’ creator, and when this news came to England Newton was enraged. While the debate raged on and both sides about who honestly claimed the rights to calculus, all communications broke down between Germany’s mathematicians and England’s mathematicians. As a result France used the work done by Newton and Leibniz and perfected calculus and advanced mathematics in their country.

Newton refused to give up his fight and continued to believe that England would eventually be victorious until his death. Newton continued on however, remaining the humble professor, but with increasing absent mindedness. Friends laughed at him when visiting his home when they saw the sight of his front door. He had cut two holes in his front door, one for a cat and one for the cat’s kitten. Often he would wander off from dinner guests after forgetting what day it was or after his thoughts had drifted away upon mathematics. He never married and lived well thanks to several wise business investments he made during his life. In 1699 he was appointed Master of the Mint by England, in honor of his service to the country. Newton took this job as well as other public service endeavors in the twilight of his career. Finally, Newton spent the remainder of his life and career tackling mathematical problems that had long baffled other mathematicians. Often solving these problems in a matter of hours, he would send the answers anonymously to his peers, such as Bernoulli as a form of professional humor. Newton died at the age of 85 in London and was buried in Westminster Abbey.