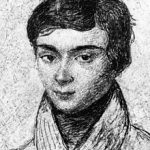 Methods for solving quadratic equation were known to many ancient people, including the Babylonian, Chinese and Hindu civilizations. Whether or not they had the quadratic formula, they had the knowledge of the main principle of completion of the square.

But for 350 years, no further progress was made. But it was Galois, pessimistic as he was, who showed that there is no algebraic formula for solving polynomial equations of degree five or more.

Evariste Galois, a French mathematician, was born in 1811. There is no sign of any mathematical ability in any of Galois’ family. He was taught by Louis-le-Grand as a boarder in the 4th class. During 1824-25 his school record was good and he received several prizes. However in 1826 Galois was asked to repeat the year because his work in rhetoric was not up to the required standard. And this weakness would turn out to be a major drawback in his life.

In February 1827, he enrolled in his first mathematics class, the class of M. Vernier. He quickly became absorbed in mathematics and his director of studies suggested that “it would be best for him if his parents would allow him to study nothing but mathematics, and that he was wasting his time there and did nothing but tormented his teachers and overwhelmed himself with punishments”. M. Vernier reported, “Intelligence, marked progress but not enough depth”. Louis Richard reported, “This student works only in the highest realms of mathematics”.

Galois took the examination of the Ecole Polytechnique twice in 1828 and 1829, but failed both times and therefore resigned himself to enter the Ecole Normale, which was an annex to Louis-le-Grand. To do so he had to take his baccalaureate examinations, something he could have avoided by entering the Ecole Polytechnique. He passed, receiving his degree on 29 December 1829. His examiner in mathematics reported, “This pupil is sometimes obscure in expressing his ideas, but he is intelligent and shows a remarkable spirit of research”.

In April 1829, Galois had his first mathematics paper published on continued fractions in the Annales de mathématiques.

On 25 May and 1 June, in 1829, he submitted articles on the algebraic appointed as referee of Galois’ paper. Galois sent Cauchy further work on the theory of equations, but then by Abel, which overlapped with a part of his work. Galois then took Cauchy’s advice and submitted a new article “On the condition that an equation be soluble by radicals” in February 1830. The paper was sent to Fourier, the secretary of the Academy, to be considered for the Grand Prize in mathematics. Fourier died in April 1830 and Galois’ paper was never subsequently found and hence never considered for the prize. Galois was invited by Poisson to submit a third version of his memoir on the equation to the Academy and he did so on 17 January, 1830.

14 July, 1830 was Bastille Day and Galois was arrested for the silly crime of illegally wearing the uniform of the Artillery of the National Guard. He was also carrying a loaded rifle, several pistols in prison he received a rejection of his memoir. Poisson had reported that: His argument is neither sufficiently clear nor sufficiently developed to allow us to judge its rigor.

In March 1832, Galois was transferred to the pension Sieur Faultrier. There he apparently fell in love with Stephanie-Felice du Motel, the daughter of the resident physician. After he was released on 29 April 1832, Galois exchanged letters with Stephanie, and it is clear that she tried to distance herself from the affair. On May 30, Galois fought a duel with Perscheux d’Herbinville. The reason for the duel is not clear but certainly linked with Stephanie. Galois was wounded in the duel and died in Cochin hospital, Paris on 31 May 1832. His funeral was held on 2 June 1832.

Galois’ brother and his friend Chevalier copied his mathematical papers and sent them to Gauss, Jacobi and others. It had been Galois’ wish that Jacobi and Gauss should give their opinions on his work but no record exists of any comment these men made. However the papers reached Liouville. In September 1843, Liouville announced to the Academy that he had found in Galois’ papers a concise solution, “…as correct as it is deep of this lovely problem: Given an irreducible equation of prime degree, decide whether or not it is soluble by radicals”. In 1846, Liouville published these papers

About the author: This historical anecdote was brought to you by Jai Paul, a graduate student in Mechanical Engineering at University of South Florida – August 2002